Anyone with the link will be able to see your plans, so share carefully.
Copy link
The link below was copied into your clipboard:
This does absolutely nothing yet
And I mean, nada.

Drag and drop items to plan your trip to Heber Valley day by day. Add or subtract days using the + and - buttons. Click "Share" to generate a link you can send to friends and family so they can see (but not edit) your trip plans.
Day {{ i }}

Valley of the Gods 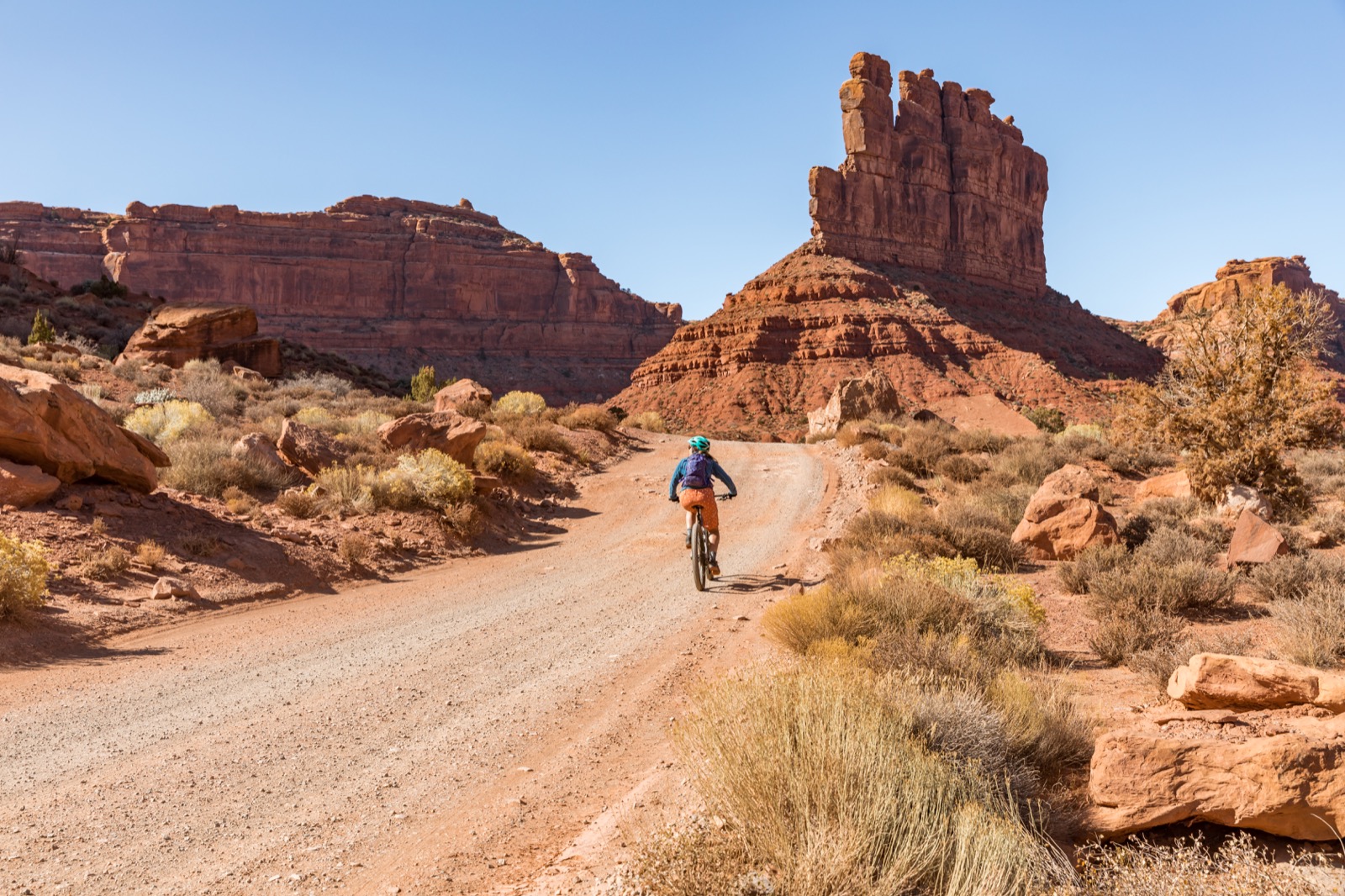 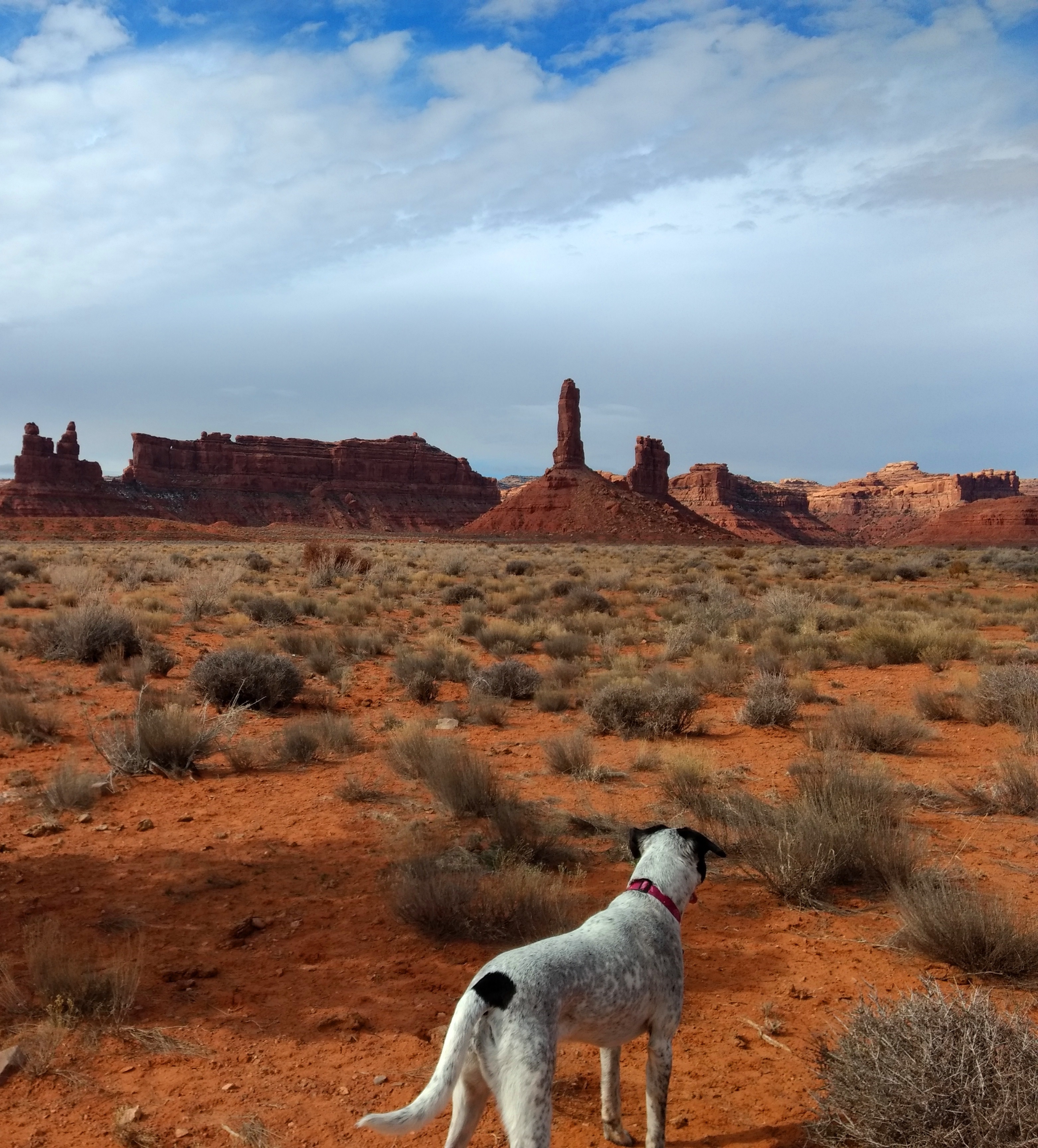 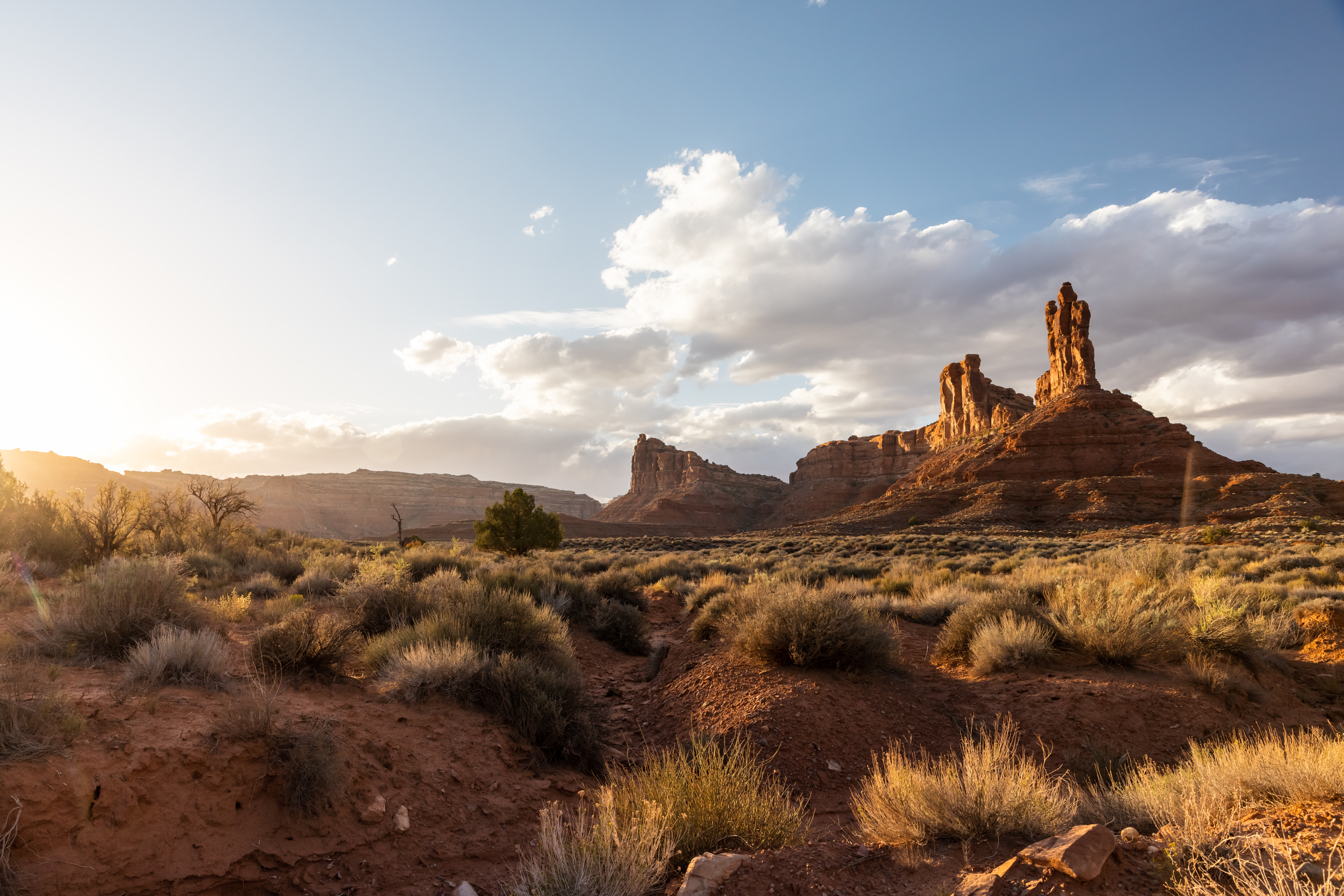 Visitors to Valley of the Gods appreciate the opportunity to take in the unique natural beauty while avoiding the large crowds drawn to nearby Monument Valley. Whether you’re interested in a dramatic photoshoot, witnessing a geological wonder or just taking a scenic drive, Valley of the Gods is worth a visit when you’re in Utah’s Canyon Country.

Driving Valley of the Gods Loop

Located near Mexican Hat in the scenic backcountry of San Juan County, Utah, visiting Valley of the Gods is usually done by driving the 17-mile road that takes visitors past the main formations within the valley. The road is unpaved but well maintained. Four wheel drive vehicles are recommended, but not necessary in dry conditions.

To enter Valley of the Gods off Hwy 163, you’ll need to cross a wash, so we don’t recommend entering the valley during bad weather.

The eastern end of the road through the valley starts a little ways out from the town of Mexican Hat, Utah on Highway 163. The western end connects with Route 261 near Moki Dugway. There are also a number of off-shooting dirt roads that zig-zag through the valley.

There is no entrance fee for visiting Valley of the Gods, and the only services available can be found at Valley of the Gods B&B. The B&B is a great lodging option for visitors who want to stay right in the valley but don’t want to camp.

Due to the remoteness of the area, be prepared to be self-sufficient and carry emergency supplies.There are no facilities, no gas stations, stores or service, and very few travelers in the area. Pack extra water, food and blankets in case of overnight temperature drops.

Limited camping is available within the Valley of the Gods area, but we recommend choosing one of the comfortable lodging options in nearby Mexican Hat if you want to stay near the valley. Lodging in Mexican Hat is also a great basecamp for visiting Monument Valley or Goosenecks State Park. 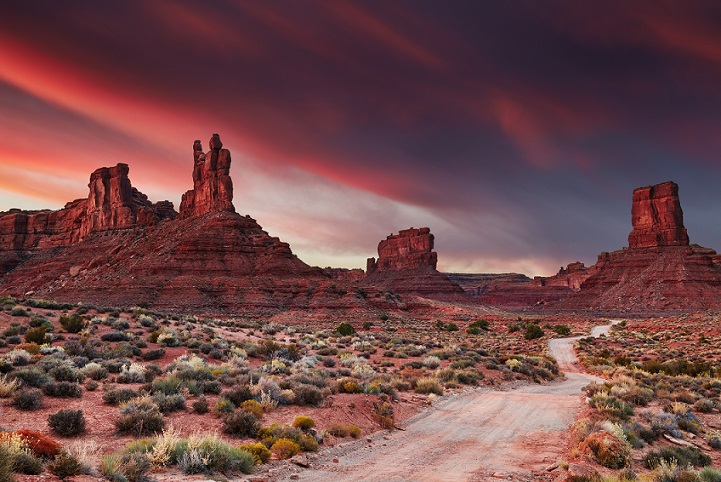 Valley of the Gods in Television

The beautiful and picturesque landscape of Valley of the Gods has served as the backdrop for multiple television and film productions.

Two episodes of BBC’s “Doctor Who” were filmed in Valley of the Gods. The iconic desert landscape served as the backdrop for one of the television show’s quirky adventures. Some fans even captured behind-the-scenes footage from afar as filming was taking place.

The 1984-1977 TV show Airwolf used the Valley of the Gods area as the secret hiding place for the titular super-helicopter Airwolf.

Valley of the Gods (Film)

Josh Hartnett and John Malkovich starred in a 2019 Sci-Fi film titled Valley of The Gods with multiple scenes shot in the scenic valley. 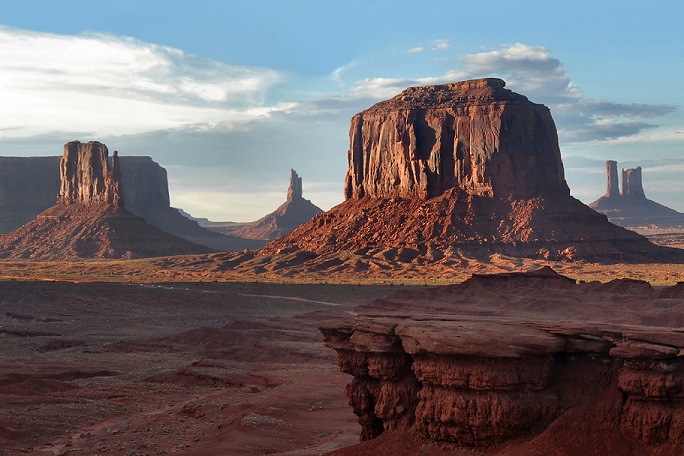 One of the most recognized, iconic pieces of the American West can be found about 45 minutes south of Valley of the Gods via US-163. Monument Valley is a must see, and one of the biggest draws to Utah’s Canyon Country. 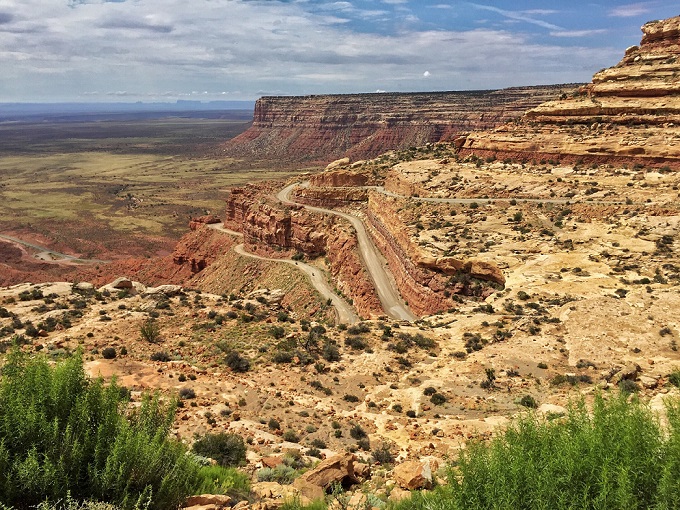 Take a drive along UT-261 to see a beautiful and unique stretch of the highway called the Moki Dugway. The dugway is a series of unpaved switchbacks down the side of a cliff that provides magnificent views out over the Valley of the Gods region. There are spots to pull off and snap some pictures along the way. 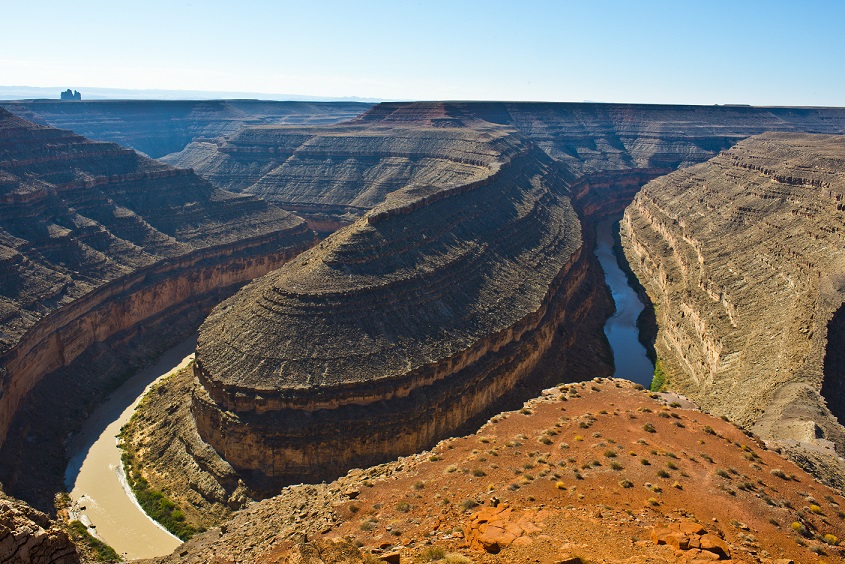 Goosenecks State Park is a place where the San Juan River has carved out an array of meandering canyon walls that tower over the river below. Visitors can enjoy the view from way up above the river looking down to the canyon walls just outside of Mexican Hat. 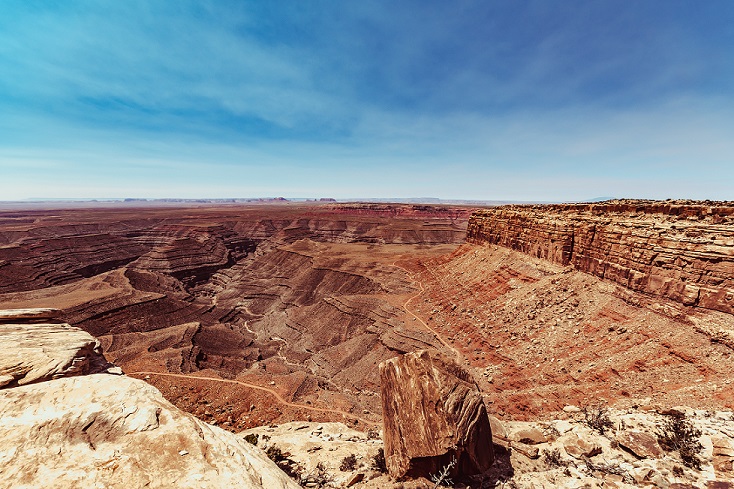 Muley Point is a nearby overlook that provides more sweeping views of this beautiful area of Utah’s Canyon Country.

How far is Valley of the Gods from Monument Valley

Monument Valley is 40 miles away from Valley of the Gods, about 45 minutes to drive.

How was Valley of the Gods formed?

When is the best time to visit the Valley of The Gods?

The best time to visit the Valley of the Gods is during the Spring and Fall seasons, before the brutal Summer heat. Take photos during an epic sunrise or sunset, with the golden sky illuminating the beautiful rock formations and sandstone landscape. At night, take in the millions of stars without any light pollution.

Before traveling to The Valley of The Gods, be sure to check the forecast for summer monsoons, which can fill the valley quickly with rains and flash floods. Always be prepared with extra supplies in case of emergency.

How much does it cost to visit the Valley of The Gods?